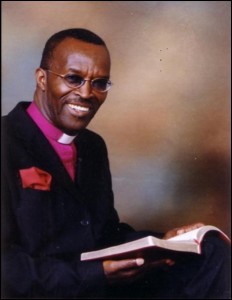 Bishop E. S Henry is the Presiding International President and Bishop of the Mount Zion 7th Day Church of God UK International Conference. He was born in the Parish of St. Catherine Jamaica on the 22nd of September 1941. Bishop Henry came from a humble beginning, with him and his twin sister out of a family of seven. He was a bad child – very ruthless and was a youth gang leader. He was so bad that the name “bitter man” (Cerassie) was given to him as an alias name.  However, in spite of such a reckless life style, at the age of 15 years, the Heavenly father changed his life for Christ Jesus and he surrendered to the call of God. From that day onwards Bishop Henry realised that he was called and anointed to preach the Gospel of Christ Jesus and to date he is still preaching the Word of God with Holy Spirit anointing.

Bishop Henry migrated to the UK in 1960 and resided in Battersea, London SW12. He met his wife Shirley Henry and together they raised four lovely daughters. He is blessed with five grandchildren. As the years went, by he moved from Battersea and resided in Thornton Heath Surrey, Selsdon in South Croydon Surrey and now lives in Warlingham, Surrey.

In 1971, Brother Eric Satford Henry received a special message from the Heavenly Father to evangelize.  That same year (in September) C.D. Reid, the late Bishop and President of the Mount Zion Sanctuary 7th Day Assemblies of Jamaica, visited the United Kingdom.  After listening to a 15-minute address in a One-day convention in Derby from this young 29-year-old Lay Preacher, Eric Satford Henry, simultaneously the Bishop approached the young man and decided to ordain him as a Pastor in the October of 1971.  Pastor Henry and his family together with Pastor Parr and his family started a fellowship (The Mount Zion 7th Day Church of God) in Streatham, South London.